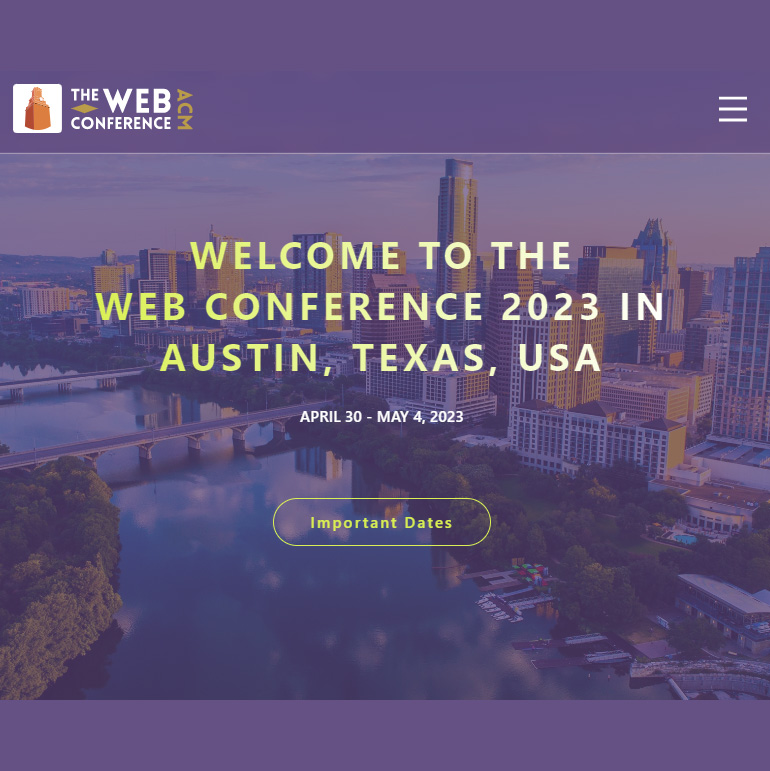 Since the invention of the World Wide Web in 1989, The Web Conference (formerly known as International World Wide Web Conference, abbreviated as WWW) is a yearly international academic conference on the topic of the future direction of the World Wide Web. This conference has been the premier venue to present and discuss progress in research, development, standards, and applications of the topics related to the Web. Over the past three decades, The Web Conference has been the forum where some of the most fundamental Web technologies have been introduced, such as the Anatomy of a Large Scale Web Search Engine in 1998 prefiguring Google, the EigenTrust algorithm in 2003 and the YAGO knowledge base in 2007 (see also the Test of Time Award past recipients). The conference assembles scholars, researchers, policymakers, practitioners, and end-users with one unifying goal: to envision and create the future of the Web.

The 2023 ACM Web Conference will offer a high quality program made of research sessions, posters and demonstrations, a PhD symposium for the junior scholars, workshops, tutorials, a developers track for the practitioners as well as thought provoking keynote speakers, panels, special track on web for good, History of the Web, and colocated special days.

Austin is honored and thrilled to host The Web Conference and is preparing an exceptional conference for sharing the latest insights of academic and industrial research. We thank you for your participation and look forward to seeing you in Austin!

Dr. Barbara Poblete is an Associate Professor at the Computer Science Departmentof the University of Chile and an Amazon Visiting Academic at Alexa Shopping Research. She is Co-PI at IMFD and CENIA in Chile, the first large government funded research centers dedicated exclusively to Data and to AI, respectively. Formerly, she was at Yahoo! Labs. Her main research areas are Social Network Analysis, Web Data Mining and Information Retrieval. She co-authored a series of innovative works on the topic of online misinformation, including the article » Information Credibility on Twitter » (2011) awarded the 2021 IW3C2 Seoul Test of Time Award. This widely cited work, was pioneer in studying so-called &quot fake-news &quot and has been featured in SciAM, WSJ, Slate, The Huffington Post, BBC News and NPR, among others. Her research has also focused on the problem of multilingual and language agnostic approaches, specifically for online hate-speech and crisis informatics. In this regard, she has led initiatives such as Twicall.cl, a social-based real-time earthquake detection system, used by the National Seismology Center and other emergency response agencies in Chile. She has co-authored over 80 peer-reviewed articles, including top-tier venues such as TWC, SIGIR, EMNLP and ISWC. Other distinctions include the Google Latin American Research Award and being nominated among Chile ‘ s &quot； 100 Leaders under 35 » . Currently, she is among the top most cited women computer scientists in Latin America. She is Program Committee co-Chair for SIGIR 2023, and recent activities comprise Track co-Chair for TWC, Doctoral Consortium and DEI co-chair for SIGIR, Program Committee Chair for SPIRE, AMW, LA-WEB, and Editorial Board member for Foundations & Trends in IR, Associate Editor for TWeb. She is also co-founder of ChileWiC, local ACM-W chapter for women in Computer Science.