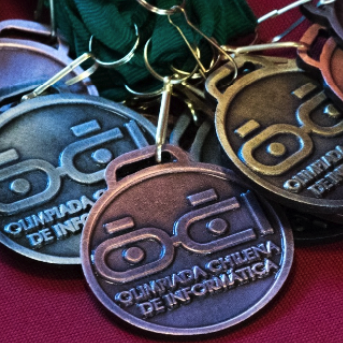 This team of four was selected after intensive training in which all the national champions participated. The training includes motivation coaching and extra challenges in competitive programming, to prepare them for the international competition.

One of those selected, Diego Rebollo, said he was nervous at the beginning of the OCI: “I got into a couple of problems but I ended up getting what I needed anyway. I am happy for what I have achieved, now I hope to perform well in the International Olympiad and hopefully become one of the medalists”, mentioned the student who is currently in high school.

The OCI invites students from all over the country to be part of the national competition. “In Chile, it is difficult to know more about the world of competitive programming, since it is not a matter present in schools. Moreover, today – more than ever – more programmers are needed for the future,” points out Javier Marinkovic, OCI Coordinator.

In the final of the national championship, the female participation stood out: although Pau Carrión was not selected to go to the competition in Indonesia, she specified that she has been participating in the OCI since 2018 and that “it was always a goal to reach this phase”, demonstrating that the important thing is to enjoy the process and that the results do not define the participants.

Although the OCI did not have major problems due to the pandemic and the online format, “these two years were difficult, because we liked the original modality of this competition much better. But if we look at it positively, this time we were able to have the participation of students from different regions of Chile, from places that cannot be reached in person”, said Mirankovic.

One of the four selected, Marcelo Lemus, is from Salamanca, a town located in the Coquimbo region. During the final selection, he pointed out that, in general, “children from outside of Santiago have not much initiatives to participate in, due to the distance, but I invite them to be encouraged because in the OCI workshops they open their doors for them to participate.”

Now the four selected are preparing to leave for Indonesia, where the 2022 International Informatics Olympiad will be held. Every year the IOI receives – from 90 countries – a delegation of four competitors and two responsible adults to accompany them. The children will compete individually: they must solve a series of programming problems during a period of two days, and demonstrate their ability to design algorithms and data structures, among other challenges.

The Chilean Informatics Olympiad is an initiative led by the Chilean Society for Computer Sciences, with the support of the companies Sovos, Cero.ai, Synopsys, the Universidad de Concepción and the Millennium Institute Foundational Research on Data Institute (IMFD).